HISTORY OF THE DODGE SUPER BEE

In 1968 the two MOPAR divisions, Dodge and Plymouth, began to engage in a bit of a rivalry. The result was the Dodge Super Bee, a competitor to Plymouth's Road Runner. Although a capable budget muscle car, it never was as successful as the Road Runner.

Dodge watched as Plymouth launched their budget muscle car, the Road Runner, in the fall of 1967 as a 1968 model. Dodge being known for as sporty than Plymouth launch its own budget muscle car. Based on the redesigned Dodge Coronet pillared coupe, Dodge looked to its Scat Pack symbol and released its new model in the spring of 1968 as the Super Bee. The $3,027 base price was about $130 more than the Road Runner, which used the same basic chassis. Curb weight was about nearly identical, and both used the same engines, so performance was about identical. The standard engine was the 335 bhp four barrel 383 cid V8 that borrowed cylinder heads, camshaft and induction system from the Magnum 440. The 426 Hemi was the only engine option, but at about $1,000 more, it clashed with the budget nature of the Super Bee and only 125 were ordered. The low price meant minimizing amenities, and although the Super Bee borrowed the Rallye gauge package from the Charger to edge out the Road Runner, a tachometer was still around $38 extra. A heavy duty suspension brakes, four-speed manual transmission with Hurst Competition Plus shifter, and redline wide oval tires came standard. The low price didn't mean low profile, and the Super Bee had Bumble Bee racing strips circling the tail, and a big Super Bee emblem hovering on the rear fenders. The grille was finished in black matte and the hood had the decorative power bulge. The wheel lips and the rear body panel were accented with thin bright moldings. Inside, the Super Bee had door-to-door carpeting, pleated vinyl seats and door panels, and a standard bench seat.

A two door hardtop joined the existing pillared coupe for 1969. The Super Bee also got a single wider rear bumble bee stripe and a Dodge "Scat Pack" badge on the grille and trunk, plus front fender engine call-outs. Also new was the Ramcharger cold-air induction system, which was standard on Hemi cars. The Ramcharger system featured two large hood scoops, an underhood air plenum and a switch to select between warm and cold. 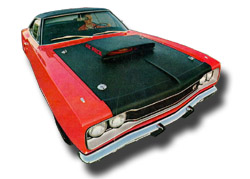 The big news for 1969 was a new optional engine in the Super Bee. MOPAR engineers took the 440 cid V8 and replaced the single Carter four barrel carb with three Holley two-barrel carbs on an Edelbrock Hi-Riser manifold, creating the Dodge 440 Six Pack (Plymouth named it the 440+6). Only the center carb was used for normal driving, to open all six, you just needed to plant your foot down. Valve springs, a hotter cam, connecting rods, and other improvements helped boost output to 390 bhp. The Hurst four speed manual transmission was standard. Torqueflite automatic was optional, but disc brakes, air conditioning, and cruise control were not allowed. The lift off hood was made out of fiberglass, had a matte black finish, four NASCAR tie down pins, and a large air scoop molded right in with "Six Pack" written on the sides. Standard black steel wheels, unadorned except for chrome lug nuts. The 440 Six Pack cost was around $460, that's about $500 less than a Hemi. The Six Pack could keep up with a Hemi up to 70 mph and came with a Hemi grade suspension that turned the Super Bee into a decent handler.

The Super Bee was restyled for 1970. To make it different from the Coronet that it was based on, the Super Bee did not get the fake rear fender scoops as standard equipment. It also had horizontally divided taillamps. New options included a hood tach and spoiler. Buyers could order the R/T type Bumble Bee stripe or pipe-shaped upper and lower rear fender stripes with a circular Super Bee decal between them. The Super Bee was available in a number of wild colors, such as Plum Crazy, Sublime, and Go-Mango. Base prices fell $64 but sales dropped to about 15,500 units. Hemis were installed in just 32 hardtops (21 with four speed) and 4 pillared coupes (all with the four speed). This was the last year that the Super Bee was based on the Coronet. 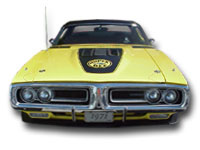 The Super Bee switched over to the Charger platform for 1971 but still represented a low-cost, high performance package. Priced at around $3,271, the Dodge Charger Super Bee included a 383 cid Magnum V8 with a single four barrel carb rated at 300 bhp (down 35 bhp from the year before due to detuning), and a three speed floor shift, power bulge hood (black finished), tape stripes, Bee decals, and a Charger 500 interior, except with a standard bench seat. The Super Bee also came with a heavy duty suspension, big fat F70-14 tires, and a long list of optional equipment. Still optional (for the last year) was the 440 Six Pack and the mighty 426 Hemi, rated at 385 bhp (down 5 bhp) and 425 bhp respectively. Only 22 Hemis were built, nine with four speeds, and 13 with the Torqueflite. 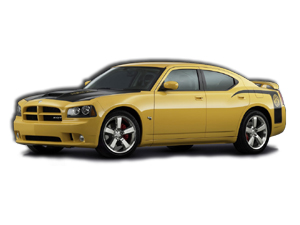 The 2007 SRT8 Super Bee has come back on the Dodge Charger platform.

The Super Bee was a budget muscle performance car on a base model. The only year the Super Bee was on a Charger was 1971. It was moved from the Coronet to the Charger in '71, because the Coronet was only offered in 4-door or wagon. But still represented a low-cost, high performance package. This was also the last year of the Super Bee. No American muscle car nameplates were ever on a four-door sedan. Cheap and fast.

Super Bee is the third of the "retro" names that has come back on the Dodge Charger platform. (R/T, Daytona, Super Bee)

Chrysler said they don't want to build "retro" like some others. Yet they use one of the biggest Muscle Car name and slogans "Charger Fever"

In '74 the Charger was going more towards the "luxury" market with the SE/Brougham. It was still a sports car (2 doors) with some comforts. Then in '75 it was all luxury and no style, a copy off of the "Cordoba".

Yes, this new Bee has some "Super" performance, with a 6.1-liter HEMI V-8 producing about 425 hp. and 420. Ft-Lbs of Torque. This is about ¼ more than the 5.7-liter HEMI. It's even rear-wheel-drive. But this is a luxury car, a flashy Chrysler 300, competing with the Cadillac and BMW with some special logos on front and rear fenders.

I hope that the new Charger will change and morph as did the '66 with fast back style to the 2nd or 3rd generations. Then, YES I could see me in a NEW SUPER BEE. Strip it down, lose two doors and keep it fast.

40 years later... Travel back to 1968, a muscle car buyer's ride would be cheap and FUN.What did you pay for? No handling, drum brakes, a 4-spd or maybe a three speed automatic and efficiency measured in gallons per mile.

2008 Dodge Charger SRT8 Super Bee Special Edition - A limited "Buzz Model" will continue the tradition of the Charger SRT8, using the classic B5 blue and is a down your throat color. Package MSRP is $1,900 over Base SRT8. Again it is a limited edition with a total production run of only 1000.

The hood scoop sucks souls, and the twenty inch wheels are Hummer compatible. While a great many enthusiasts will hail the Bee's extra-extroversion as welcome break from today's automotive appliances, most people will hate the look of this car.

The matte-finish decals on the hood and rear side fenders are a resolutely retro touch. They are big and bold like the original. They are a nice nod to the Super Bee history and cool.

The Super Bee is a modern car only to the extent that it's presently being built. It follows the old formula of sticking a huge and powerful engine into a hum-drum big car. Of course, we've got better safety these days. Only Super Bee side curtain airbags are optional and most of those ones already built don't got 'em, leaving drivers with two count 'em, two airbags.

Impact protection or not, Dodge won't have too much trouble selling Super Bees; collectors and muscle car fans with firsthand knowledge of the era will snap them up as a second chance to buy what they couldn't afford back in the day. In that sense, we who followed should be glad cars like the Super Bee exist. But unless tail out powerslides are your staple diet, at $46k, its best admired from afar. 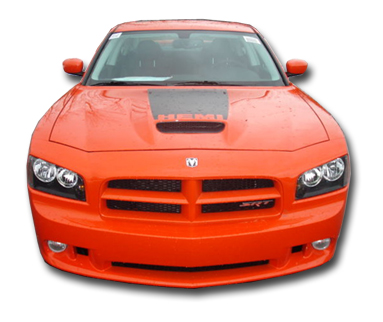 For 2009 there will be a limited edition Super Bee "BUZZ MODEL" in Hemi Orange with a serialized dash plaque number of 1 of 425. The Super Bee package includes custom wheels with black anodized pockets, exterior decals for the hood and "Super Bee" on the rear quarter, and silver Brembo brake calipers, Orange accent color on the seats. A possible limited edition Brilliant Black Edition (spring 2009)

Again in 2009, the Charger SRT8 is powered by the 425-horsepower, normally aspirated 6.1-liter HEMI V-8 producing 420 lb.-ft torque. The power for the 6.1-liter HEMI is channeled through a five-speed automatic transmission with specially calibrated, driver-selectable Auto Stick, which offers fully automatic or manual shifting selection.

Handling is engineered for performance with an Electronic Stability Program and ABS with brake knock back mitigation tuned specifically for the 2009 Dodge Charger SRT8.